The present research is conducted as part of the personal contribution to the Metrolab Brussels project and within the framework of the collective reflection (Bortolotti, Dessouroux, Sanchez, Véroone) around the project Manufakture Abattoir, ERDF Brussels project 2014-2020. The work’s premise is that the project’s site - the Abattoirs d’Anderlecht - with its market and slaughterhouse activities, can be seen as an ecosystem (fig. 1) that entertains a complex network of formal and informal relationships, activities, and practices at different scales with its neighbourhood (Cureghem) and the city of Brussels. The investigation around waste prevention and management practices put in place by the Abattoir company in collaboration with community and private actors provides a single but exemplary case of the variety of relationships that underpin activities on the site. Within this framework, the collective research focuses on questioning to whom concerns the urban transformation processes entailed by the ERDF project. The vision of the project is discussed vis à vis its possible impacts on the site and neighbourhood of Cureghem. Preliminary insights suggest that, focusing mainly on creating space to attract new businesses activities, the vision might fall short to create the conditions for addressing also environmental and social issues at the core of the ERDF program, but also necessary to the private initiative to succeed. 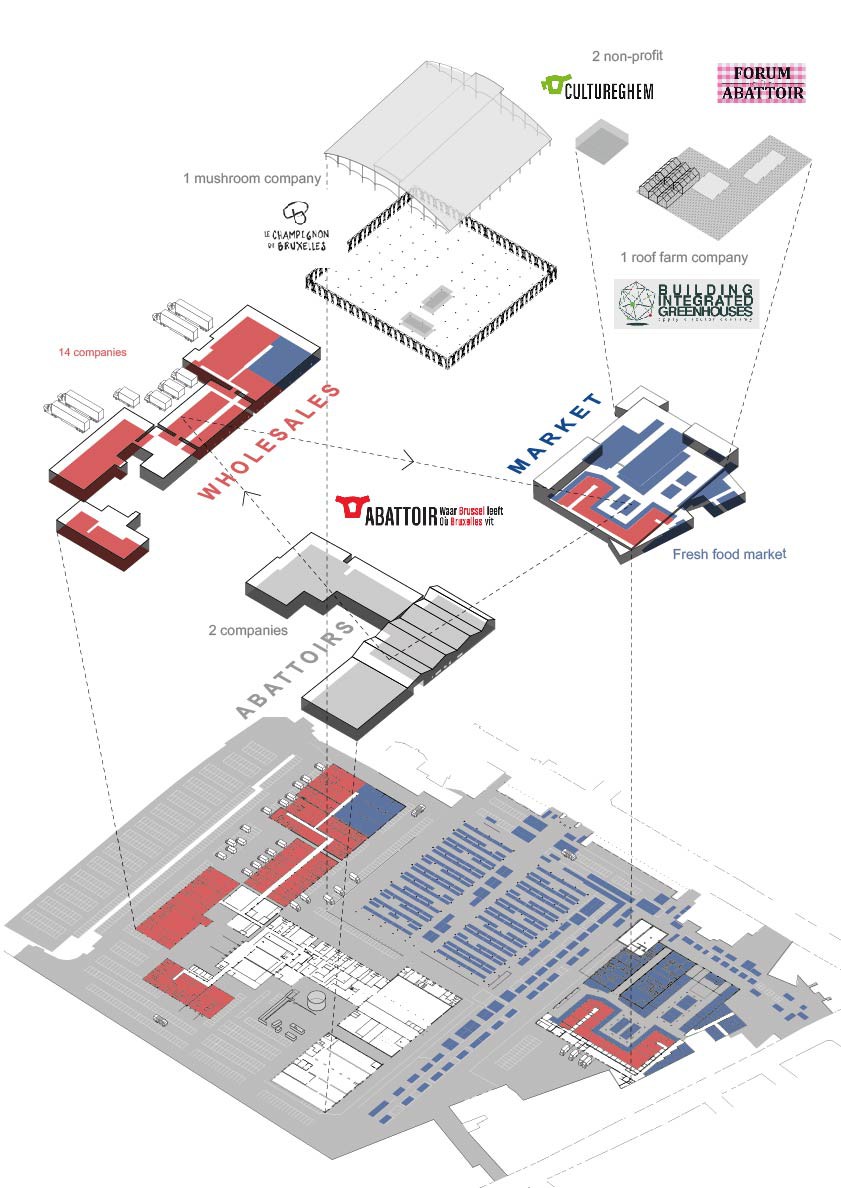 Urban waste can be seen as an extended nexus of material, social, and economic flows that characterize the socio-metabolism of cities. As discussed by social scientists, the issue of waste links technical and social issues 1 and crosses multiple scales which comprise global policies and discourses on waste and the way these policies and discourses are translated and negotiated at the local level 2. Even though municipal waste does not represent the largest waste stream (e.g. compared with construction and demolition waste), it is by far the most visible. It is therefore a politically sensitive issue and since some time is central to the larger debates on creating more sustainable and liveable cities. Still, discourses on waste are largely understood as a technical problem about the management of its disappearance. In the effort of organizing it in the city, waste is commonly treated as an object rather than a subject of transformation. What if the organisation of waste would become a resource for imagining the city differently? What if it would provide a way for measuring urban’s levels of spatial and environmental justice? What if, in conclusion, waste would become a tool for designing a more just city? The research aims to develop a theoretical construct from the empirical analysis of the case of the Abattoir d’Anderlecht.

The research builds on urban design research and practice 3. Its main objectives are:

Since 2008, the Abattoir company has implemented a separate collection of recyclable materials (paper, plastic, and organic waste), a choice taken also for economic reasons, given the high cost of disposing generic refusals (mandatorily through the regional incineration facility). At present, recyclable materials are sorted and stored in a ‘recycling point’, an area of approx. 700 m2 located in the back of the slaughterhouse building and equipped with a weight station, a compressor machine, and three large freight containers. Containers are taken by two different private companies weekly and transferred to Antwerp and then China (plastics and papers) and Quevy, South of Belgium (organic waste). Market wastes are brought to the recycling point directly by the stallholders. A sort of 'individual producer responsibility' system motivates the stallholders at taking care the refuses they generate during the market activity. This arrangement, contracted between the company and stallholders, adjusts the stall rent according to the individual commitment in leaving the stall as much clean as possible at the end of the market (fig. 2).

Another waste practice can be observed on the area during the market hours. Gleaning, the act of collecting unsold fresh foods, takes places on Sunday during the last market hours, when the vendors discard perishable goods that have not been sold during the market days. On the one hand, informal gleaners mix with the vendors when they dismantle the stall and pack back their things into the trucks collecting the still edible goods that are left on the ground (fig. 3).

On the other hand, and with the aim to regulate the informal activity on the example of other markets in Europe, a volunteer collective organises the collect of unsold but still edible food among the market stalls. Volunteers, who have previously taken contact with the market vendors, run through the market stalls with hand carts, pick up the unsold food boxes, and bring them back to one single food delivery point located at the border of the market area. Here, the delivery of food takes place through a counter where people can ask for it. Moreover, a refrigerator allows to stock eventual surplus and give it to other associations and the food banks in the following days (fig. 4).

To conclude, in the site of the Abattoirs, waste management relies on a hybrid – hard and soft – infrastructure: a physical infrastructure proper of productive areas (the space for container storage and truck movement) and a social infrastructure typical of dense urban areas, where everyday life is underpinned by intense social relationships. The system attains an effective management of waste as shown by the fact that in 2016, for the first time since separate collection start in 2008, the amount of recyclables (plastic, 600 t; paper 700 t, and organic waste, 240 t) has surpassed that of residual waste (≈1.200 t). The system, at present, has both positive social and economic outcomes since, through the collaboration with market vendors and volunteers, part of the waste stream is redirected towards the social economy and part towards the recycling industry.

This phase aims to question how the waste economies which happen in the shadow of the claim of urban development programmes and plans but which, at present, have positive social and environmental outcomes, might be better integrated within urban design processes and procedures. To do that, the issue of waste is undertaken by a series of design explorations which aim at making space for waste in the project and site of the Abattoirs d’Anderlecht. The waste issue is thus reframed as a key element for improving social inclusion and, on turn, a designerly approach allows to visualize and evaluate new approaches to waste management. Design explorations builds on existing practices and advance potential reconfigurations for enhancing waste prevention and exchange on-site. Design explorations are built in collaboration with the project stakeholders and discussed within the MLB activities.

the author is thankful to all the people who, interviewed during the fieldworks, have generously shared their time and knowledge, and in particular, Mohamed Ibrir (Responsable Propreté, Abattoir SA), Patrick Leonard (Environnement/Energie, Abattoir SA), and Jacky (Association AlimentAB).