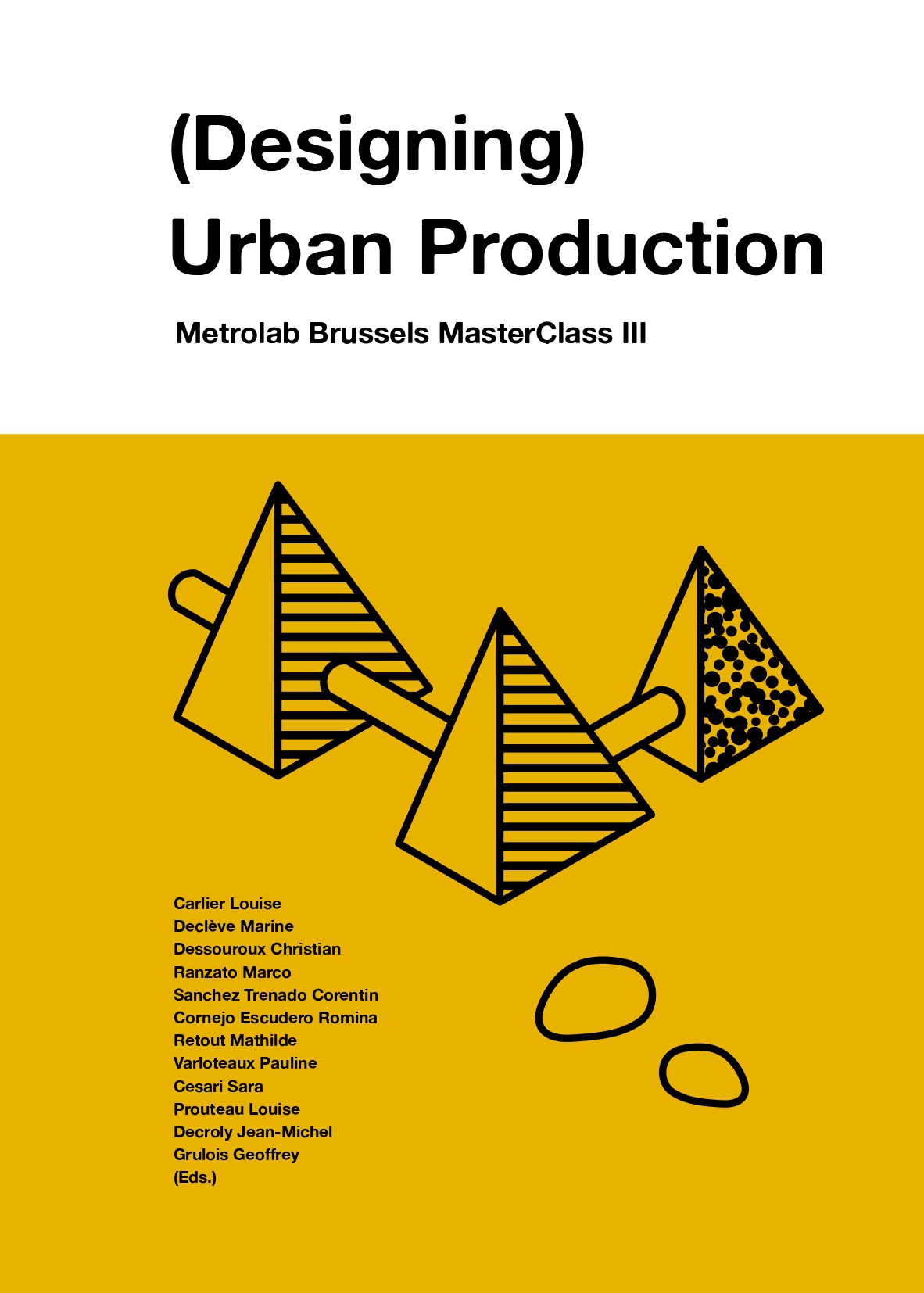 This book presents the results of the third international MasterClass hosted by Metrolab in January and February 2020, on the theme of urban production in Brussels. This event was devoted to the development of a practical reflection on the relation between production of the city and production in the city. How to approach urban production from a transdisciplinary and critical perspective? Before going deeper into this question, we would first like to situate this project in the context of Metrolab.

This book presents the results of the third MasterClass, on the topic of urban production. In a context where European and local public authorities are promoting the maintenance and / or reinforcement of productive functions in the city, the MasterClass ‘Urban Production’ pursued the objective of better understanding the interactions between production in the city (productive activities in the urban environment) and the production of the city (the daily manufacture of fabrics and urban projects), and identifying the issues at stake. How can these dimensions of urban production be approached in an interdisciplinary perspective while taking into account the diversity of productive activities and the diversity of their modes of urban integration? To address this question, this MasterClass proposed to work on two analytical and methodological axes: one relating to the different types of productive activities in the city, the other to their modes of integration in the urban fabric and the role of urban policies in this regard. These two axes cross all the different parts of this publication.

The first part of this publication, entitled ‘Context’, includes several texts that provide an understanding of the topic as it occurs in Brussels: the different types of productive activities and their historical development in the city (Jean-Michel. Decroly); the different planning tools and city planning imageries’ that have shaped the place and development of productive activities in this urban environment (Benoit Moritz); and the impact of European urban development policy on urbanistic and economic planning (Marine Declève). It also explains the methodology that has been set up to approach this topic during the MasterClass. The last text of this first part presents the three territories explored during this MasterClass. The methodology, thematics and territories of investigation were defined by a group of researchers from Metrolab (Louise Carlier, Romina Cornejo Escudero, Marine Declève, Jean-Michel Decroly, Christian Dessouroux, Geoffrey Grulois, Marco Ranzato, Mathilde Retout, Corentin Sanchez Trenado) in close collaboration with the two Metrolab managers (Sara Cesari and Louise Prouteau).

The second part, entitled ‘Explorations’, has been co-produced with the MasterClass participants – researchers with diverse disciplinary and geographical backgrounds – who worked in close collaboration with economic actors, project leaders and institutional stakeholders from Brussels during those two intensive weeks of research. This part is divided into two sections: the first one, ‘production in the city’, proposed a descriptive analysis on different types of productive activities, based on specific case studies of companies in Brussels which differ both in their modes of production and in their modes of urban integration. The second one, ‘production of the city’, presents a prospective analysis of sites and projects intended for productive activities, whose programming and design were still under discussion during the MasterClass. Based on these case studies, this section addresses more broadly the issue of urban planning of productive activities.

The third part of the publication, ‘Discussion’, includes critical insights on specific issues of urban production addressed during the MasterClass by experts in the field: the tension between old and new types of productive activities (Alexandre Orban & Corentin Sanchez Trenado), the importance of mixed use neighbourhoods for maintaining urban production (Adrian Hill); the difficulties encountered in preserving some monofunctional areas for industries in the city (Jan Zaman); the redeployment of neo-artisanal activities in urban spaces (based on the case of micro-breweries) (Pauline Delperdange & Marc Zune). This publication ends up with a conclusion by Metrolab researchers that looks back on the various paradoxes that can be observed between the intention to maintain productive activities in the city and the difficulties encountered in actual practice. It then proposes to address questions often left unanswered in reflections and debates on urban production: why should these activities be maintained in the city? Which activities should be publicly supported, and how? Beyond the matters of design, these questions invite us to consider the issues of inclusion and ecology in the world of urban production. Lastly, the publication also includes an appendix containing a listing of all the actors, institutions, plans and tools cited in this publication; in order to facilitate reading, each time one of them is cited, an asterix will refer you to this appendix. We hope the Brussels Urban Production MasterClass and this publication will provide insights for reflection and action on these issues and offer tools for further interdisciplinary research on these questions.